Lego X: Building a Physical and Virtual Skyscrapper at the same time - inLIFE
Skip to content

What if you could build your design in real life, then tweak it virtually? That’s the idea behind Lego X, which uses networked plastic bricks to build digital 3-D files. Lego X is a network of bricks that communicate through an app.

The Gravity team behind it believe there is much to be gained from being able to actually build something rather than looking at a perspective drawing, for example, if you wanted to change something you just add another brick.

Just imagine a group of architects sitting around a table, bricks splayed out before them. Instead of emailing digital files back and forth, each can grab a brick and watch as the design changes. Paired with the Lego Architecture Studio kit launched specifically for architects, this technology could provide a new tool for designing buildings.

Lego X taps something more basic: Our desire to play with toys. Gravity’s Lego X system recognises forms created with each brick, using location-mapping and gyroscopic sensors to plot the position and orientation of each of the components to create a digital 3D model. As you stack one brick atop another, a rendering appears on your tablet in real time. Each block is modelled individually within the interface, so moving, turning, or connecting the physical objects by hand is mirrored in real time on screen

Once you have your digital file, you can modify it to remove the nubs from the bricks, smooth corners and add windows The modelling software is also able to create more realistic architectural structures by calculating when the user is building an angled section, forming a flat sloping plane on the screen rather that a staggered portion. This means your design will look less like blocks and more like a skyscraper! 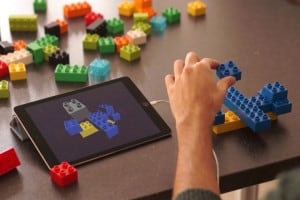 The app allows users to store the digital models and export the 3D files to use as they wish, for purposes including 3D printing. At the moment they’re Duplo blocks, not Lego, but Duplo X doesn’t have the same ring! Gravity, hopes to develop the platform to work with Lego, “The next iteration would be integrated into the standard Lego size bricks,” said Sosanya. “This is why we call it Lego X.”