Mobile's are #1 for getting online - inLIFE
Skip to content

It probably does not come as a surprise that smartphones are the UK’s most popular device for getting online. The answer for the surge for mobile phones to be number one by industry monitor Ofcom is video. Everyone wants to watch video and the availability with the expansion of high-speed 4G data networks makes it easier. Many are watching television using catch up services such as the BBC IPlayer, although this puts the licence fee under threat. 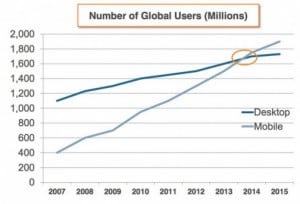 Smartphones are now responsible for a third of internet access and the amount of time we spend on them has risen to one hour and 54 minutes per day. Phones are becoming the most important hub of information. Not only that they are the most popular way to bank too. People are checking their current account 895 million times on their mobiles. We are also moving £2.9 billion a week using banking apps.

Do you remember when Google changed its algorithm in support of more mobile responsive sites? If your site still isn’t mobile responsive we can have a look into it for you because if more people are using their mobiles to view websites you don’t want to be missing out on the majority. You can read more about mobilegeddon here.

Check out David’s latest video on mobile optimising your website…