So our latest addition to inLIFE headquarters is our “new” Nintendo area! I say new in quotes as it is actually a trip down memory lane with all the game consoles dating back to the very first one at the start of the 80’s.

In order we have:

From where it all began the Nintendo Family Computer, released in 1983 also known as the Famicon. Following the successes of a series of arcade games Nintendo brought the arcade experience into people’s homes with its first of many cartridge-based consoles.

Following that the Family Computer got upgraded to Nintendo Entertainment System, 1986. It became the best-selling gaming console of its time, the NES could play different titles that could be purchased at the store.  The NES / Famicom sold 61.91 million units worldwide, by comparison the Xbox One has only sold 10 million!

Along came the Super Nintendo Entertainment System, 1990 it featured enhanced graphics, a brand new controller, and more. It was the first 16-bit console by Nintendo.

Nintendo 64, 1996 featured greatly improved 3D graphics and a new controller that introduced the modern joystick. It was also the first home console to have four controller ports built into the system.

Now into the 21st century the, GameCube was released at the start in 2001 featuring enhanced graphics and a new controller. The games came on mini-discs. It was the first Nintendo home console to solely use a disc format for games.

The last console to come from Nintendo was The Wii nearly 10 years old it was released in 2006. It featured motion controls, a new online system and slightly improved graphics. However, the graphical change wasn’t nearly as dramatic as previous console transitions.

Our history of Nintendo consoles are all working! So if you fancy after your meeting a bit of nostalgia come have a go on Donkey Kong or Mario Kart!

Also in our Nintendo Hall of Fame we have all the handhelds too.

We have the Donkey Kong edition of the Mr. Game and Watch that was released in 1980.

Then came the start of the Game Boy’s with the first starting in 1989, it was the first portable, interchangeable cartridge handheld by Nintendo. Games were 8-bit black-and-white and were played on a green-tinted screen. The system had a red LED which showed the remaining power. It could last for over 30 hours on its required 4 AA batteries.

Next the Game Boy went on a diet with the new slimmer version with the Game Boy Pocket. It was in our pocket by 1996 and took 2 AAA batteries this time but lasted for less time. The originals did not come with the red LED but was later added due to a high demand.

Moving in to the 21st century we have the Game Boy Advance which was a major improvement over the Game Boy Color with a new handheld shape, shoulder buttons and better graphics.

The Nintendo DS was released in 2004 with two screens the bottom one being a touch screen. The system also had enhanced graphics.

We have had our own Nintendo sign made from Nigel at Wide Format Solutions, to complete the archives of Nintendo and to complete the gaming experience we even have a couple of gaming chairs. 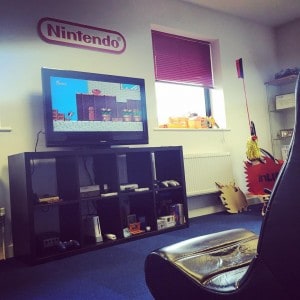 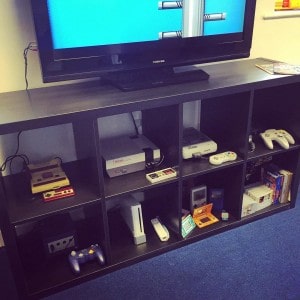