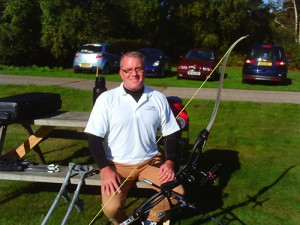 At inLIFE we have sponsored local archer Wayne Evans who has his sites set for Rio Paralympics 2016.

Wayne Evans in his youth was an avid sportsman, running for the county with Cannock Chase CC and an AAA champion runner. However when Wayne had a fall at work in November 2009 his spine became severely damaged and he was told by doctors that he would never walk unaided again. Doctors then discovered Wayne had scheuermann disease directly effecting his spinal cord.

Wayne was determined to not let this be the end of his sporting career, after trying out  wheelchair archery on a family holiday he rekindled his passion for sport deciding that he was going to give it his all. Within the space of four months Wayne placed 14th out of 250 at the AA Staffordshire County Championships.

Wayne found progression in the sport was not only enduring but very expensive with specialist equipment required to progress any further towards his olympic 2016 goal. At this point we stepped in to sponsor Wayne, funding equipment and training session with Wayne wearing an inLIFE T-shirt and branding at all competitions where possible.

Recently Wayne has just won his classification and recently attended the Paralympics trials at Lilleshall then the following weekend attended Stoke Mandeville. Wayne has been informed if he continues to train harder through the winter he shall make the England team, with the next event being the Stoke Mandeville Paralympics Competition against the world in June 2014.

After a number of meetings with Wayne we are confident Wayne will go on to represent England at Rio, and inLIFE will be with him every step of the way!