If you live in the Lichfield or Sutton Coldfield area you may be lucky enough to get recommended magazine through your door.

If you missed it we have included the full article below: 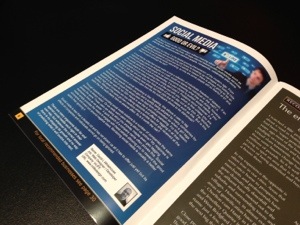 It’s hard to turn on the TV nowadays without hearing about social media such as Facebook, Twitter and YouTube. All large internet based public publishing services allowing open communication between people, companies, celebrities and more.

Although still in its infancy it is the fastest growing phenomenon of the modern age. From inspiring revolutions and reuniting long lost lovers to breaking up marriages and fueling riots. With the time old balance of good and evil it stands to reason there is always going to be an argument for and against social networking, so why are some people still so fearful of it? and does the good outweigh the bad?

It must first be noted that social media is only a reflection of individuals freedom of speech. If an individual spray paints his thoughts on a wall, would we blame the individual or the wall? A common perception is that people do not want everyone knowing what they are doing, however this usually stems from a lack of understanding. It is your choice to publish social media, if you don’t want people to know something then simply don’t post it. Problems occur however if a friend uploads a picture telling the world he is at the zoo with you, which is fine unless you are having a ‘sick day’ and your boss then finds a photo of your fun day out at the zoo. Far fetched as it may sound many people have already lost their jobs due to cases such as this. But is this social media’s fault? Or does it stem from the the individual’s choice to be dishonest?

A recent advancement in social networking is Geo Targeting, this allows a user to tag themselves at a specific location (via gps) and is quickly being adopted by many companies for
advertising. Word of mouth has always been the best form of promotion so when a girl tags herself at a hair salon for her 500+ friends to see this is priceless marketing. For this reason many high street companies are now offering discounts and offers for tagging in at their location. Although if the same girl then mentions what a terrible haircut she received at the salon then this could clearly have an adverse effect. So is it worth the risk?

Through experience in providing social media solutions to a number of companies the same question is always raised ‘Do we really want users talking about us online? My response is always the same “Those users are talking about you anyway, maybe even geo tagging themselves there as we speak.” A quick search of a company name often proves this. Social media simply provides the means to engage with these people allowing you to reward the good comments and even turn around negative views. Monitoring social media is usually a better option than ignoring it.

Social media is less than a decade old and has not shown us all it has to offer just yet but its effects on companies and individuals cannot go on being ignored.

There are many arguments both for and against social media each right in their own way, but whatever the correct answer there is no stopping its growth and no way of predicting what it will evolve into next.